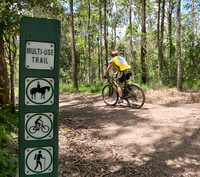 Before the establishment of the Moreton Bay Penal Colony at Brisbane Town in 1824, the Mt Coot-tha area was home to the Turrbal Aboriginal people. From the early days of the colony, residents travelled to Mt Coot-tha for the views. A lone, large eucalypt was left after clearing the top and the area named One Tree Hill. In 1873 the forests were declared a timber reserve to supply timber for railways.

In 1880 a large part of the mountain became a reserve for a public park and named Mt Coot-tha, a derivation of the Aboriginal word 'kuta' meaning honey. In 1919 the lands transferred to Brisbane City Council. The park expanded in 1920 under Mayor William Jolly.

Gold was prospected and mined at Mt Coot-tha intermittently from 1890-1950. The ore quality was very low and only small amounts of gold extracted. During the Second World War, the reserve became a military base and served as a mine storage and assembly depot.

Approximately 370 wildlife species and 450 native plant species live in Mt Coot-tha Reserve, including a number of rare and threatened species.

Animals in the area include:

The primary weeds in Mt Coot-tha Reserve include lantana (Lantana camara) and exotic grasses and creepers.

You can start this track from the top of Sir Samuel Griffith Drive or at the JC Slaughter Falls Picnic Area, which you can access from Mt Coot-tha Road. It is one way, so you will need to return back the same way to return to your car. This is the easiest and most maintained track up to the summit lookout. The paths are wide and smooth to allow for the heavy foot traffic. There are over six water stations on this track so you and your four legged friend will be fine for water. The picnic facilities have water, toilets and plenty of shade. This track is 1.9km’s one way, however you can add to it by stepping off the track and doing the Hoop Pine Track which is one way and 900 metres. The Hoop Pine Track deviates off the Summit Track and returns you to the Summit Track further down. The same with the Hovea Track which is 300 metres but it doesn’t really add any distance to your walk as it returns you back to the Summit Track. There is a water crossing however it has always been dry in our experience. The track has a few stairs but they are easy and well maintained. The track is fairly shaded most of the time so the ground is always cool enough for your furry friend however there is a concrete path in full sun near the car park and at the summit lookout. If you intend to go to these places, you will need to go when it is cooler or carry your dog over these parts so that their feet do not get burnt.

Plenty of car parking at either end of the trail but it is best to avoid peak times.

The Summit Lookout has water, maps, toilets a dog friendly cafe, restaurant and of course a view!

There are plenty of mountain biking trails in the forest but they are not allowed on this track.

Tell your family or friends where you’re going, when you expect to return and who is with you. They can contact Police if you don’t return on time. Follow the relevant link to download a Trip Intention Form and leave it with somebody. PLAN YOUR WALK, STAY ON TRACK, TELL SOMEBODY.

Short Walk
Duration Hours: 1hr30
What To Wear:
What To Bring:

Notice something not quite right with this listing? Send us some feedback and we will review the listing.

Suitable for people with a disability or wheelchair with assistance. No hiking experience required as trails have a flat even surface with no steps or steep sections. Hikes generally less than 5km.

Suitable for most ages and fitness levels. Hiking experience is recommended as trails may have short steep hill sections, rough surfaces and natural steps. Hikes generally less than 20km

Suitable for experienced hikers as navigation and technical skills will be required. Trails will be long, rough and very steep with limited signage or navigation aids. Rock scrambling and river crossings may be required. Hikes generally less than 25km.

We're not around right now. But you can send us an email and we'll get back to you, asap.

Find awesome listings near you!